My blog
Reflexology in Egypt

One of the most interesting aspects of the history of Reflexology is the evidence of the use of foot massage in ancient Egypt.

This intriguing depiction was found in the Tomb of Ankhamor. 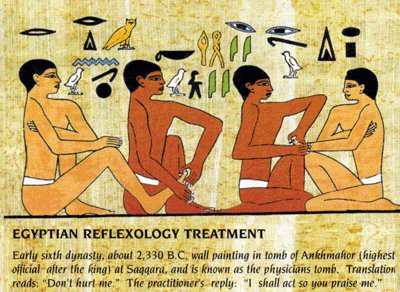 It is also known as the Tomb of the Physician because of the many depictions of medical scenes, and it was discovered at Saqqara, Egypt in the nineteenth century. Ankhamor was known as ‘Vizier, First under the King, Overseer of the Great House’ and was one of the most important officials of the Pharoah, Teti.

It is important for Reflexologists, because although there is plenty of anectdotal evidence for the use of Reflexology in ancient times, this is the earliest pictorial evidence we have.

The inscription reads, "Don't hurt me.", and the practitioner replies, "I shall act so you praise me."

A worthy goal for any Reflexologist